Youngsters shine at a rain and wind-lashed Harrier League. 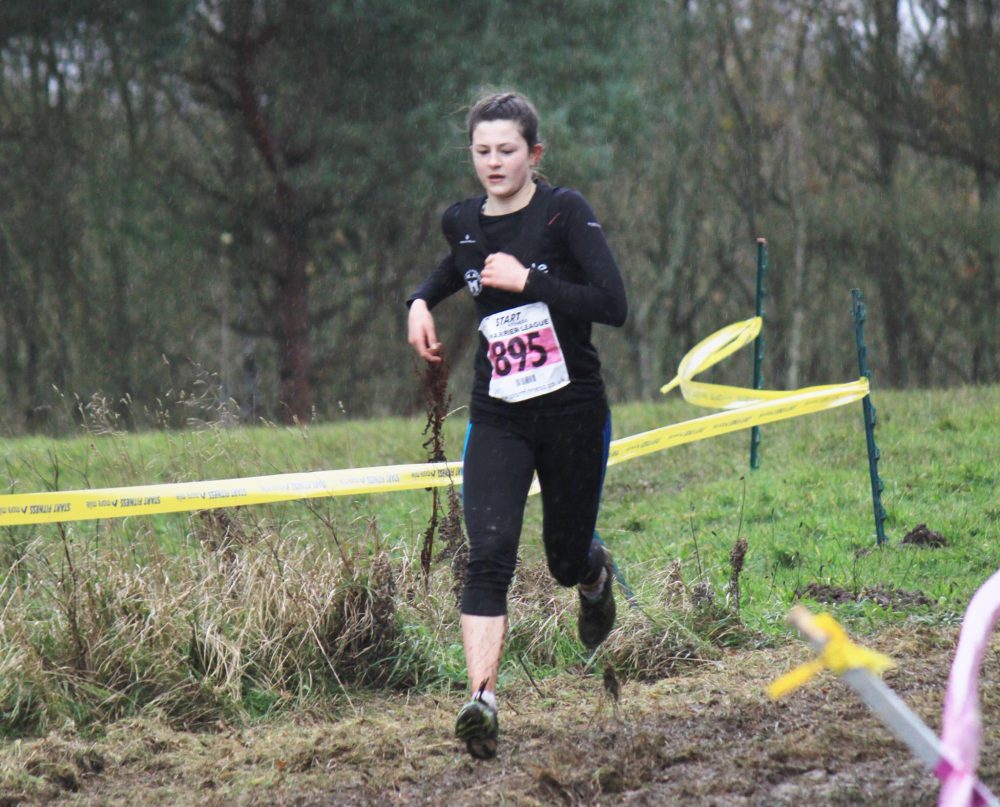 There were some great performances across the board for Tynedale Harriers on Saturday, in some of the worst conditions ever experienced in the Harrier League. Winds whipped up to gale force, threatening to flatten the club tents and brought with it prolonged periods of rain that soon had everything wet through and the ground turning to a quagmire.

The juniors were admirably resilient, kept smiling and worked hard in their races – their parents can be proud of them.

There were several Harrier League debuts on the day and all can be assured that they’ve experienced cross country running about as tough as it gets. The sun will be shining for the Town Moor in January, honest!

Notable debut runs came from Lisa Thornley, 1st in the Under 15 girls; Lucy Thorpe, who was 2nd in the Under 13 girls; Craig Bradshaw, 10th (out of 537!) in the Senior Mens race and Alexander Weightman, who was a useful 33rd and first Tynedale home in the Under 13 boys.

Lisa’s first-place helped the Under 15 girls to a comprehensive victory as first team. She was supported by Keeley French, only 32 seconds behind in 5th place, and Ellen Ricketts, blasting through from the fast pack in 12th. There were nine other Tynedale girls in this category, which is a brilliant turnout – well done, all of you! The girls are running away with the league title, having already bit up a formidable lead over second-place Birtley.

The under 13 girls aren’t far behind them; Lucy’s second place was followed by Olivia Milburn (fast pack, 17th), who managed a brilliant time despite running with one shoe for much of the race; and Annie Anderson in 27th, also fast pack. Roisin Lally (fast pack) wasn’t far behind in 35th. They finished 3rd team on the day and sit in fourth place in the league, only 1 point behind third.

Another individual victory on the day was from Max Pearson, who made full use of his first appearance in the Under 17 boys and therefore a start from the slow pack, winning by a huge margin, the second placed finisher 1’35” behind. Team-mate Jaycee Shotten had another strong run from the fast pack, finishing in 17th. Unfortunately they didn’t have a third counter, other wise would likely have been third team. As it was they still finished 5th, enough to keep them in third place in the league.

Tynedale again had a strong, enthusiastic turnout in the U17/U20 women’s team, which is great to see. Ellie Bluck had a typically strong, gutsy run and was pleased enough to come in third and first counter for Tynedale, but it turned out the first runner across the line (a Morpeth athlete) had run from the wrong pack and therefore disqualified. So Ellie was promoted to second place, earning her first medal in the NEHL. Hannah Pinkney was second counter from the fast pack in 8th and Laura Vickers in 24th. Sophie Hayter, Anna Channon & Freya Murphy made up the team. They finished second team on the day and are now in second place in their division; excellent effort lasses, keep it going in 2016! Hannah’s consistency sees her currently third in the individual grand prix: brilliant!

The Under 13 boys were 9th team on the day. Led home by the afore-mentioned Alexander, with support from Archie Marston (fast pack) in 44th and Tom Barrett (slow pack) in 45th. Logan Lowes also had a strong run in his first outing of the season, finishing not far behind in 47th.

The Under 15 boys also benefited from category debuts and therefore slow pack starts, with Ben Dykins finishing in an excellent 2nd place and Joe Anderson less than 20 seconds behind in 5th Cameron Grey was the third counter, finishing in 35th having run from the fast pack. The lads were 2nd placed team on the day, taking them from 5th to third in the league.

The conditions were just about at their worst as the senior women waited for their start. Once the slow pack got under way, team captain Kim Bluck was soon among the leading dozen or so runners. She matched daughter Ellie in great toughness in the testing conditions to keep going and finish in an excellent 20th place. Karen Robertson had another storming run from the fast pack and was the next Tynedale finisher in 52nd. Karen is currently third in the individual vet women grand prix. The final two counters were Lucy Courtney (61st) and Leanne Hayter (62nd) both starting from the medium pack and finishing barely a second apart. The ladies team finished 6th overall and are comfortably ‘mid-table’ in the 1st division.

Craig’s excellent 10th place was only enough to pull the senior men up to 9th team from division 1 on the day, and they remained rooted to the bottom of the table. Next counter for the men was super-fast vet Peter Hearn in 75th, followed by Ivan Newton in 84th, Ally Maxwell (medium pack) in 126th, Peter Murphy in 193rd and Adam Pratt (fast pack) in 202nd.

There’s a bit of a break in the Harrier League over Christmas, with the next fixture on Newcastle Town Moor in January, however the North Eastern Cross Country Championships beckon on December 12th.