A year in the life of an ultra marathon runner…. 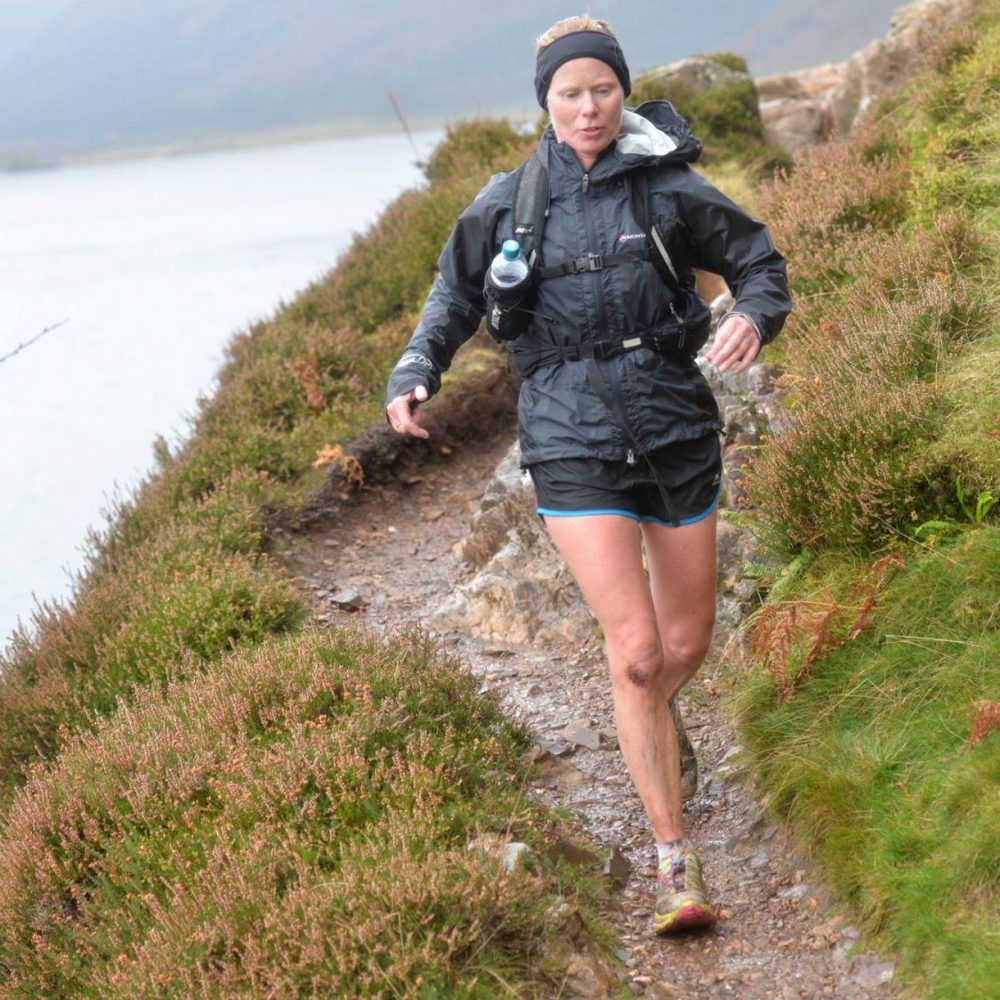 Rachel Chinnery was not looking forward to her 50th birthday one little bit and she wasn’t quite sure why. So in defiance of the ageing process she decided to embark on a series of ultramarathons with a couple of normal marathons thrown in for good measure (all off road) during the twelve months surrounding this milestone birthday.

Race number one was the High Terrain Events Ennerdale 50k in the Lake District at the end of last October. Horizontal rain washed Rachel’s contact lens away half way through but she managed to achieve 3rd lady and first FV40 in around 5 and a half hours.

The second was the gruelling NAV4 Adventure Tour de Helvellyn covering 39 miles and with about 8000ft total ascent. This race always takes place on the shortest day of the year in December and Rachel achieved a good time for the course in 8 hours 44 minutes.

Then came January 2015 and the dreaded birthday which turned out to be great! Eager to get on with her first race as a 50 year old and pushed for time, Rachel chose to run the Newcastle Racecourse Ultra in January. Nineteen laps of the ambulance track on the inside of the course made about 50k and Rachel was not only first vet lady but 2nd lady overall in a time of 4:19. Maybe she hadn’t lost IT after all, whatever IT is but who in their right mind runs 19 times round a racecourse!!?

The end of February brought the Coastal Trail Series Endurancelife Northumberland Ultra from Alnwick Castle finishing at Bamburgh Castle via a beautiful route up the coastline and circling Bamburgh to make up about 37 miles (longer than stated). Again Rachel did well to secure 3rd lady and first V50 male or female. 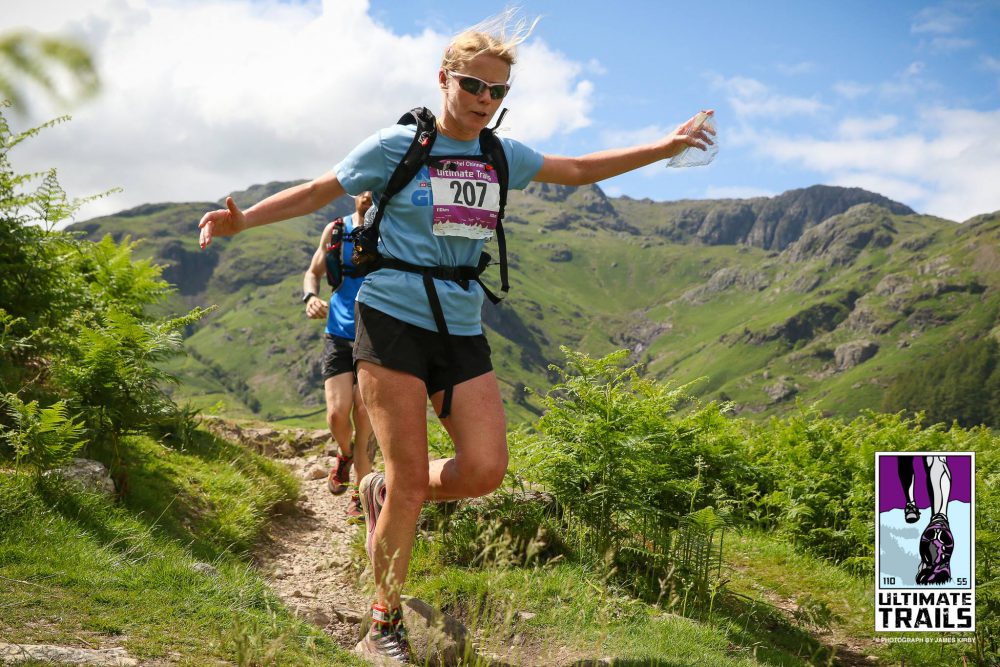 March involved getting the flu and pleurisy as a complication and not knowing whether she would be able to do her next race in April. However the antibiotics kicked in on the Wednesday prior to the event so Rachel decided to run the race the following Saturday, take it easy and “see what happens”. The race in question was the very tough NAV4 Adventure Lakes Mountain 42 with approximately 10,000ft total ascent taking in the peaks of Helvellyn and Place Fell, Grisedale Hause and Boredale Hause in a circular route from Askham village near Penrith. Rachel had a good day despite a bit of chest pain and achieved 2nd lady and first lady vet. It would seem that it takes more than a spot of pleurisy to knock a tough northern middle aged bird of her perch!

So with springtime upon us, Rachel decided to take May off to rest up because June was to be an altogether different month for her. In early June she ran one of her old favourites;

The Lakeland Trails Coniston Marathon. She was a very respectable 6th lady and 1st FV50 coming in at 4:13 in a large field of runners. Three weeks later and thoroughly tapered she ran the ultra which was to be the big one of the year and which all the other races had basically been training runs for;

The Lakeland Trails Ultimate Trail 110k. This is a circular race starting at midnight in Ambleside and involves 69 miles and 14000ft total ascent, taking in many difficult mountain passes and challenging terrain. There is a 24 hour cut off time and quite a few don’t make it but Rachel managed to complete the race in 16 hours 24 minutes. She was 6th woman and 1st FV50 in a large field from many parts of the world as this ultra carries 3 UTMB points. 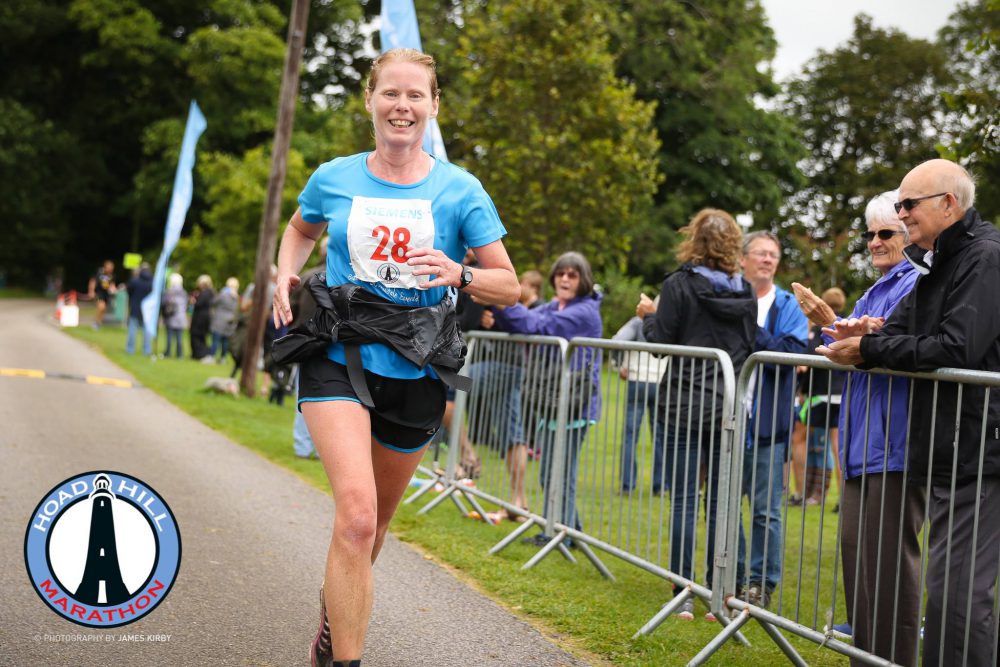 No racing during July but just before going away on holiday Rachel thought she’d better keep her mileage up by entering the all new Pure Outdoor Events Hoad Hill Marathon out of Ulverston. A very hilly second half and torrential rain from start to finish made this more difficult than it should have been but she managed 4th lady and again 1st FV50 in 3:59.

A complete rest and no running for three weeks followed and after returning from holiday Rachel managed to break a lower rib (not by running) which made moving very painful. So apart from her usual coaching duties with various clubs she rested up for a further four weeks. Apart from, that is, taking part in a previously organised relay race she was committed to. This was the Pure Outdoor Events Cumbria Way Ultra from Ulverston to Carlisle in September and Rachel was a member of The Lakeland Trails Relay Team along with fellow harriers, Tamsin Cass and Grace Rowley plus two others. Rachel’s leg was Keswick to Caldbeck (a mere 15 miles) and the whole day was very civilised and sociable in stark contrast to her usual solitary slogging. The girls won First All Ladies Team and got to Carlisle before darkness fell which was a bonus.

The twelve month period surrounding Rachel’s birthday was coming to an end so she decided to enter one last ultramarathon in The Lakes. With seven weeks out from proper training the High Terrain Events Three Peaks Ultra was never going to be easy at 52 miles and 13,500ft total ascent but she thought she’d give it a go anyway because she liked the route. Leaving Keswick at 5am and running along Borrowdale to Watendlath, over the fell to Rosthwaite and on to Seathwaite before ascending Scafell Pike via the corridor route, climbing up and down through cloud inversions was magical. The route then made its way to High Raise, down to Thirlmere, up to Helvellyn summit, along the ridge to Threlkeld and Latrigg, round the back of Skiddaw to Dash Falls before ascending Skiddaw summit. Then it was a hasty descent back to Keswick and a very warm welcome at the Moot Hall 14 hours after she’d started. Although nearly 20 miles shorter but with similar ascent to her longest race this year, Rachel found this one very difficult but still managed 4th lady and 1st Lady Vet. A definite case of mind over matter, this one!

Seven ultramarathons and two marathons in less than twelve months undoubtedly breaks every rule in the endurance running book and could not be sustained year on year but Rachel managed to do it and remain injury free this year. She attributes this to long rest periods after races. Not just days but a couple of weeks at least of no running before embarking on the next long run or indeed race, in some cases. Multiple ultramarathoning could, she believes, not be achieved without this. All but two of Rachel’s races took place in the Lake District this year. It’s a region she knows and loves very well which makes it all the more enjoyable. If she didn’t enjoy it, she wouldn’t do it. Life’s too short. At 50 you start to realise these things! 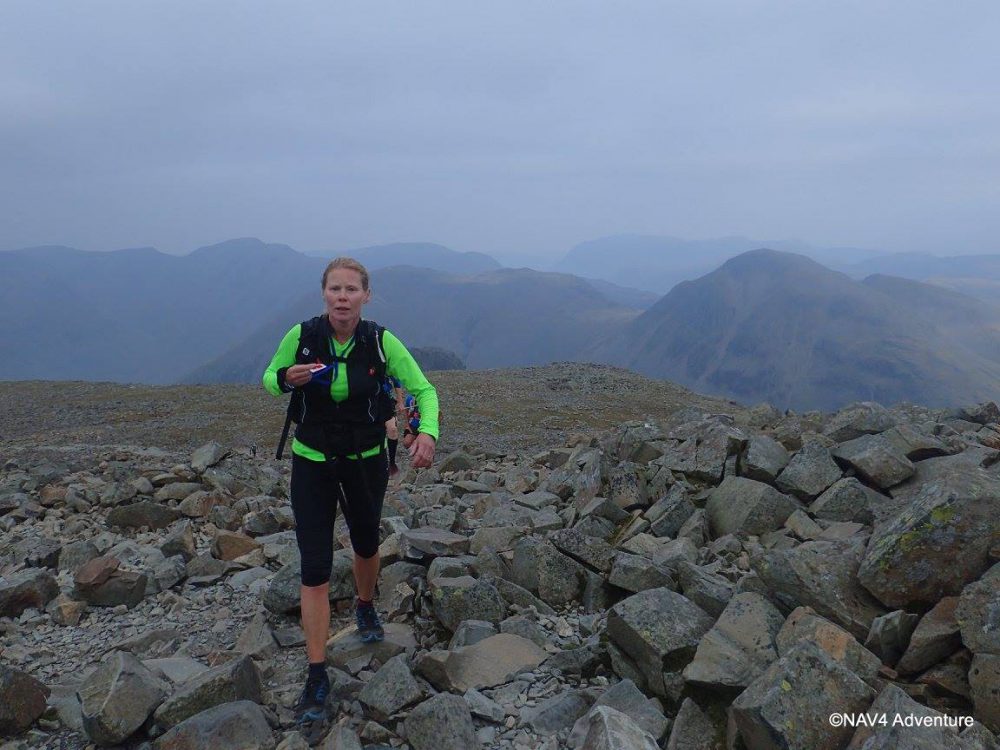