Saturday saw a memorable finish to the 2012-13 North East Harrier League season. Tynedale Harriers hosted the final fixture at Prudhoe, based at the Community High School. The weather played its part – with the icy wind proving a challenge to runners, spectators and marshals alike.

Tynedale ended on a high, with some great results, both on the day and for the season as a whole.

The senior men achieved their objective of promotion back to Division 1 in some style, coming in as first team from division 2 on the day. First counter for the team was Richard Parker finishing an excellent 3rd overall. Next counter was Adam Pratt, who had a blistering run from the medium pack to finish in the top 30. Next was Phil Vincent in his first Harrier league outing of the season, finishing just outside the top 50 in 52nd. Only 12 seconds behind him was Paul Hutchinson in 59th and another 20 seconds separated him from Syd Coxon in 69th, and then only another 10 seconds to Dexter in 73rd and our 6th counter. 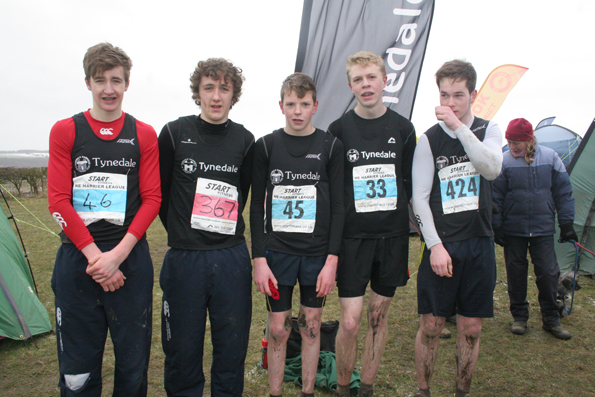 The boys’ teams across the age range have had an outstanding season under the watchful eye of endurance coach Peter Venus. They ended the day with an individual 1st place, two 2nd places and a 3rd place finish. Such was their dominance that they also won all three team competitions. To top it off the points accrued across the six-race season meant that Max Pearson emerged victorious in the under 13 individual grand prix alongside the under 17 boys in their team grand prix and there were second places in their respective grands prix for both the under 13 and under 15 teams.

The under 17 squad has benefitted from strength in depth and with 6 runners scoring points at various stages of the season they started the race in a hopeful mood. On the day it was Ally Maxwell-Gray who rose to the occasion with a dominant run from the slow pack for a famous victory. Chasing hard from the fast pack were Jonny Currie in 3rd and Toby Routledge and George Sanderson in 6th and 10th respectively. Jonny’s individual performance earned him 9 points and 4th overall in the Grand Prix standings whilst the team positions earned a comfortable victory and sufficient points to pip Alnwick Harriers and secure the coveted team grand prix trophy.

The under 15 boys were similarly convincing and with Fergus Robinson in 2nd place, Adam Todhunter 6th (from the slow pack) and Jonny Anderson 7th they were clear winners of the day’s team competition and did enough to secure 2nd place in the team grand prix standings.

Max Pearson rounded off an honour-strewn season with the day’s fastest time in the under 13 race passing all but one of the slow pack runners to cross the line in 2nd position. He finished his season with maximum points to claim the individual grand prix title. Ably backed by Patrick Lally (7th from the slow pack) and Christopher Jackson in 10th he led his team to victory and another 2nd place finish for Tynedale Harriers in the team grand prix.

Injuries and other commitments put paid to Tynedale ladies’ hopes of retaining the championship trophy they won last year. They could only manage 9th position on the day, finishing 4th in the final table. Kirstie Anderson, running from the fast pack, was first Tynedale home in 35th place, followed by Charlie Pinkney with a strong run from the slow pack, in her season debut in 51st and third counter was the team captain Steph Scott running from the medium pack and finishing in 70th place. Kirstie’s consistently strong performances throughout the season saw her finishing as second Veteran Lady in the individual grand prix, with teammate Karen Robertson just behind her in third.

The next generation of Tynedale ladies is showing promise as the under 13 girls had a good day, topped by a first place for Chantelle Ree, making the most of her start from the slow pack. With support from Freya Murphy in 12th and Mhairi Shearer in 16th, the girls finished as 2nd team on the day.

Huge thanks to Mike Broadhurst for organising the whole thing again, he does a brilliant job. Thanks also to all the marshals – especially those out on the course, I’m sure you all appreciated the extra support as well as being shown the right route! It really was fearsomely cold to be standing around for all that time.

With weather the way it is it’s hard to imagine that the summer is looming, but lets match an excellent cross country 2012-13 with success in the track and field season.

Good luck to everyone currently doing the Greener Miles Running (@markmarchant131) 'Even Bigger One! Team 24 hr Vir… https://t.co/A0dFp21qWe
Saturday 20th June
If you’re missing your 5k fix, @BritishMasters have a virtual 5k relay challenge to celebrate the cancelled road re… https://t.co/OmbPDUHfIm
Monday 15th June
The club newsletter for June should be in your inbox ready for your lunchtime reading, including a great selection… https://t.co/Zd3n50bpJC
Saturday 13th June
Just 2½ weeks left in June for juniors to enter the home pentathlon challenge. Tynedale 👕 for all participants! Det… https://t.co/YHG75WSsMV
Friday 12th June