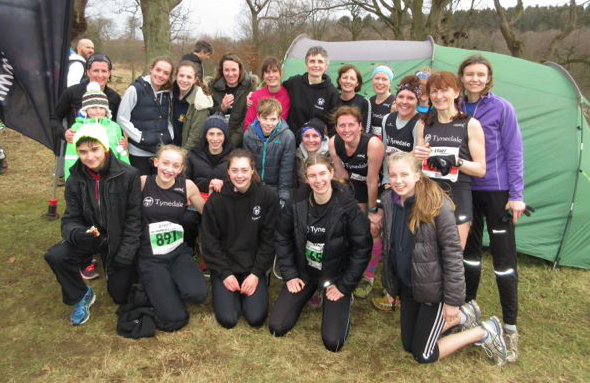 The contrast between the conditions underfoot at the last cross-country fixture at Jarrow and this weekend’s Harrier League fixture at Alnwick could not have been greater. After the mudbath at Jarrow, the ground at Alnwick was uncharacteristically dry with all runners completing the exceptionally scenic course with clean shoes!

Tynedale Harriers was represented by more than fifty runners across the age groups, but this month it was the turn of the U15 girls’ team to shine. Ellen Ricketts, running from the fast pack, recorded the fastest time of the day by almost 20 seconds and led the field of 45 runners home to win the gold medal. The team secured a comfortable win on the day thanks to excellent runs by the rest of the team: Mhairi Shearer and Poppy Goldsmith, running from the slow pack, finished in 7th and 8th places. They both earned promotion to the fast pack for all future races in this age group. Bella Chicken completed the strong team. With one fixture to go this season, the team are lying in second place overall.

The U15 boys also fielded a strong team, with 7 runners representing Tynedale. Alex Wood, running from the fast pack, was first to finish for the club in 7th place, with Christopher Jackson finishing soon after in 10th, also from the fast pack. Patrick Lally, ran well from the slow pack to complete the counters for the team, finishing in 20th place. The team ended the day in 3rd place, but it is looking unlikely that they will be knocked off the top spot overall with only one fixture left this season.

There was a large field of 63 runners in the U13 boys’ race. Archie Marston was running for the first time in this age group and should be pleased with his debut run as he was first finisher for Tynedale, finishing in 26th place. Aidan Pinkney, running from the fast pack, and Joe Green were the other counters for the Tynedale team. They were 8th team on the day which leaves them lying in 7th place overall, with one race left.

Six girls turned out for Tynedale in the U13’s race, all running from the fast pack. Their performance saw them finishing in 9th place on the day leaving them in 2nd overall after 5 fixtures. Jasmine Couchman and Keeley French were the first two counters for the team, finishing in 19th and 26th places. The next four Tynedale girls had their own race for the line, finishing in 46th to 49th places! Bethan Nitsch took the honours to be third counter, with Freya Barr and Roisin Lally finishing within 4 seconds, and Isobel Maxwell-Gray crossing the line only 11 seconds later!

Large fields continue to enjoy the U11 races. In the boys’ race, Harry Courtney was first to cross the line for Tynedale, finishing in 24th place. Ciaran Lally was the latest member of the Lally family to compete at cross-country and had a good debut run to finish in 52nd place, with Blake English just behind in 54th.

Jemima Stewart and Rebecca Green represented Tynedale in the U11 girls’ race, finishing in 25th and 59th places respectively.

Tynedale didn’t manage to field a full team for either of the U17 races, but Jaycee Shotton ran well to finish in 10th place in the boys’ race, whilst Hannah Pinkney and Laura Vickers continue to impress with strong runs in the U17 girls’ race.

There were almost 300 runners in the senior/vet women’s race, including 12 wearing Tynedale’s black vest. Lucy Siddle, in her first run for the club this season, was first finisher for Tynedale crossing the line in an impressive 20th place. She earns promotion to the medium pack for future races. Kirstie Anderson and Karen Robertson, running from the fast pack with a four minute handicap, put in their usual strong performances to cut through the field and finish in 45th and 53rd places respectively. Final counter for the team was Lucy Courtney who ran from the medium pack and finished in 69th place. Nicky Jeffrey and Jo Lally both joined the team for the first time this season. Tynedale finished the day in 5th place which leaves them lying in 7th place overall in Division One.

The women’s race was won by Magda Grinsdale (Tyne Bridge Harriers) who ran from the slow pack and finished in 28:22. The fastest time of the day was recorded by Emma Holt (Morpeth Harriers & AC), running from the fast pack, who finished in 5th place in a time of 26:34.

The mission for Tynedale’s senior men at Alnwick was to cement their place in the top two places of Division 2 and get one step closer to promotion.  Their chances received a boost when Rob Foster and Dominic MacDermott toed the line for the first time this season and they weren’t disappointed, with the team finishing in a fine 2nd place putting them in pole position with one fixture to go.

Rob was an individual winner in the final fixture last year so hopes were high for a good finish from the Medium Pack.  Veteran, Dominic had been impressing in training and he was also expected to do well.

As the clouds began to close in, over 500 men set off on 3 laps of the challenging Alnwick course.  Rob scythed through the field despite giving away a two and a half minute handicap to the majority of runners.  He finished with the fastest Tynedale time of the day, by some margin, finishing in 13th place overall in 37:13, only 2 minutes behind the fastest time of the day for the 6 mile course.  Dominic also enjoyed a strong debut and his 58th position from the slow pack earned valuable points for the team.  The ever-consistent Paul Hutchinson was 3rd counter (103rd), closely followed by Andy Green running from the fast pack (119th), who just managed to overhaul Sean Wylie (133rd – medium pack) and Pete Murphy, the final scorer in 137th place.  A good turnout for Tynedale was finished off by Martin Bluck (176th), Tim Wylie (212th), Keith Lombard (281st), Neil Cassidy (346th) and Peter Graham (412th).

Second place on the day means that Tynedale now lead Division 2 by two points ahead of Crook AC with only one fixture remaining and are assured promotion to the Harrier League Premier division if they can manage to field a team of 6 runners at Wrekenton in 2 weeks time.