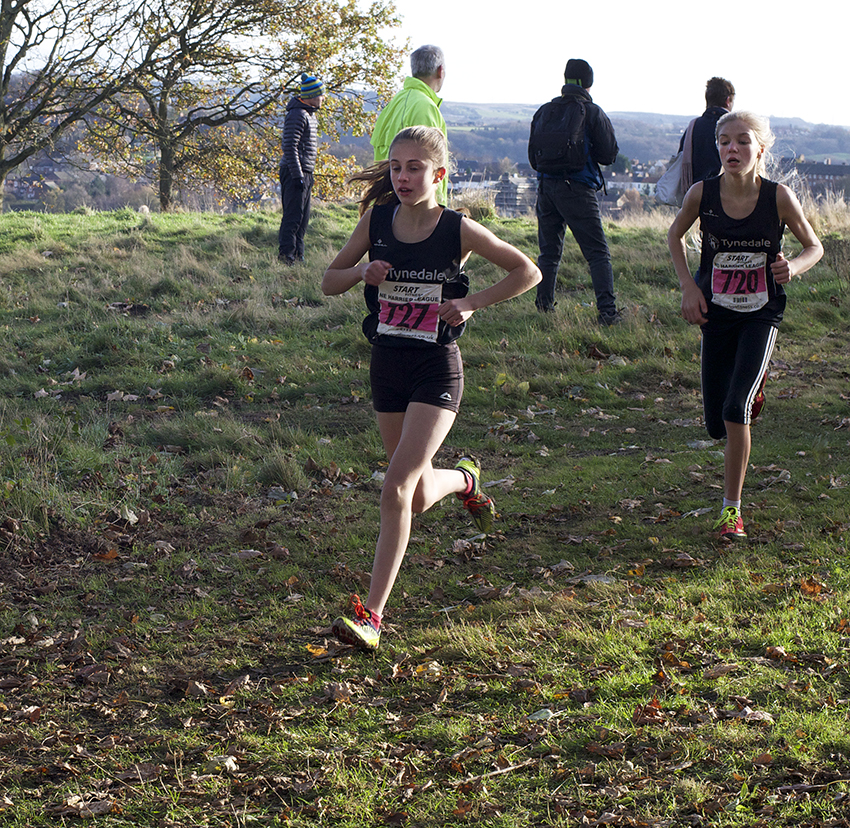 A few days ago weather forecasts were being anxiously studied, for it looked like Saturday was going to pretty grim. Gale force winds with wintery showers seemed to be on their way just in time for the second fixture in the North East Harrier League. As often happens though, by the time Saturday came along the forecast was toned down a bit and although a bitterly cold breeze whipped across the elevated plateau of Aykley Heads, the sun shone in prolonged spells and it stayed dry. It was still very nippy though, and many juniors in the earlier races came in looking like 15 minutes or so of exposure on the challenging course had been a bit of an ordeal.

Akley Heads is a great cross country venue – where ‘great’ means twists and turns, several extremely muddy sections and a few really testing climbs. Pace yourself sensibly, put in the efforts when you can and it’s tough but rewarding; get it wrong and you can find yourself in oxygen deficit half-way through the first lap.

One Tynedale star who judged it perfectly and really excelled was Alex Wood, running in the Under 15 Boys race. Starting from the ‘fast pack’ Alex picked up all but five of the ‘slow pack’ runners ahead of him and his time of 11:58 for the one-lap course was by some distance the fastest time. Indeed it was one of the fastest lap times of any age category on the day, only bettered by a couple of the best senior men. Alex’s blistering run helped the Under 15 boys to 4th place on the day, the other counters being Aidan Pinkney in 10th (running from the slow pack) and Cameron Grey in 37th, like Alex running from the fast pack.

Tynedale team performance of the day came from the Under 15 Girls who were 1st in their category. Counting for the team points were Jasmine Couchman, in a brilliant 1st place overall. Jasmine ran from the slow pack and will be promoted to the ‘fasts’ for the next fixture, but judging by her time on Saturday she should be quite at home at that level and will still be fighting for a top 20 position at least. Other counters were Bethan Nitsch in 4th,and Holly Thorpe in a great Harrier League debut in 10th (both girls will also be promoted to the fast pack with Jasmine). The Under 15 girls are the most well-represented of the Tynedale junior categories, with Keeley French, Bella Chicken, Millie Robertson, Anya Herdman, Freya Barr, Poppy Goldsmith the other runners making up the nine strong team. The girls also top the league after the two fixtures.

The Under 13 boys were led by their team captain Archie Marston with a typically strong run, finishing in 9th place which will see him promoted to the fast pack. Magnus Hextall and Tom Barrett were the other counters, enough to the the lads finish as 8th placed team.

Lucy Thorpe (slow pack, 13th), Olivia Stewart (fast pack, 29th) and Olivia Milburn (fast pack, 33rd) were the three counters in the Under 13 girls race, enough to see them finish a very creditable 5th team. Olivia Stewart deserves special mention for stopping to help a Birtley girl who was sick on the last hill, earning her a heartfelt thank you from the girl’s mother on the Harrier League Facebook page!

Both Under 13 teams did brilliantly well in what must be the toughest 3km or so they’ll do this year.

It was great to see Tynedale represented in both the Under 17 boys and girls races, traditionally a category that sees fewer competitors. In the boys’ race Robbie Langford was first home for Tynedale, finishing in a fine 4th place (and 2nd slow pack runner). The other counters were the ever-consistent Christopher Jackson and Jaycee Shotton in in 20th and 26th respectively, both lads starting from the fast pack. They finished 4th team on the day – a great effort. The Under 17 girls went one better, fishing as 3rd placed team. Hannah Pinkney lead the way, finishing in 11th place (starting from fast pack), with Elena Bluck and Rosie Dawson next Tynedale runners home in 18th and 19th (both slow pack). Tynedale also had Laura Vickers, Anna Channon, Freya Murphy and Ellie Barr all running; a great turn out and the most from any one club. Way to go, girls!

There were excellent turn-outs for both Senior Women and Men’s teams. The women were led home by Jo Sutton in 30th and Kim Bluck in 45th, both strong ‘Slow pack’ runners, which is what’s key to getting valuable points. Unfortunately Jo’s 30th place put her in the top 10%, which will see her promoted to the medium pack. Karen Robertson was chasing these two down from the fast pack and finished third counter in 62nd place. Club cross-country champion Kirstie Anderson was fourth counter and only 9 seconds behind Karen – an exciting battle between two of the club’s strongest cross-country runners. The ladies finished as 7th team on the day, which is also where they sit in the league table. As long as they keep getting the numbers out they should be fine for another season in the top division.

The Senior Men have got a fight on their hands for maintaining 1st division status. Last-placed team on Saturday sees them drop to second bottom of the division. Peter Hearn was first home for the club in 76th place, followed by Ally Maxwell (medium pack) in 126th, Andy Green (Fast pack) in 133rd, David Armstrong in 183rd, Peter Murphy in 248th and Paul Hutchinson in 274th. Adam Pratt had had a great run from the fast pack, finishing in 112th place, but unfortunately ran with last season’s number, an automatic disqualification. He’s since used this number to light his wood-burner, so he won’t make the same mistake! We need more runners getting into top 100 – so any Senior Men out there, please try and join us for the next fixture.

After what was a bit of a gap between the first and second Harrier League dates we’ve got two fixtures in consecutive weekends, and so the 3rd match is this Saturday (28th), at a new venue (but familiar to some of our triathletes), Druridge Bay. Looking at the map it shouldn’t be quite as tough as Saturday, but makes good use of the slopes rising from the lake. We hope to see lots of you there.

Fancy a go at the Harrier League? It’s a great winter work out, and very friendly with lots of team members there to cheer you on!

See your team captain (see below) or coach as soon as possible; registration for next Saturday will open very shortly and close a day or two before race day.

Thanks to Derwentside, Durham City and Elvet Striders for organising such a good event and a special shout out to the many marshalls and officials who spent hours standing around in the cold wind and somehow remained cheerful!